As anyone who knows me can attest to, I hate winter. I don’t like being cold. I don’t like shoveling snow. This winter we have experienced record snowfalls and it’s had me down.

I slacked off in almost every aspect of my life. The laundry piled up. Papers went ungraded. Blog went updateless. New year’s resolution ignored. I only read one book in February “fangirl” by Rainbow Rowell. I ordered it from Amazon when it showed up on a list of people who bought John Green books also bought this author. 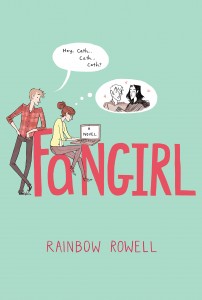 “Fangirl” is the story of Cather a college freshman with a great deal of baggage: a runaway mother, a mentally unstable father, a popular twin sister and the whole new world of college life. Cather writes a fan blog about a popular book series and decides to major in English and discovers that her professor. while enamored with her she isn’t exactly a proponent of fan fiction. The book was clever, but at times the use of snippets from the fictitious popular books series became mundane and I even skipped some of the snippets. Overall, I would recommend the book to my students, but maybe not all of my friends.

I also purchased Rowell’s other book “eleanor & park” and I will read it, but I want to read the “Divergent” series before the movie comes out in two weeks and Green’s “The Fault In Our Stars” before its summer release date.

Some days you just want to wear leggings and boots to school. I have yet to see any significant evidence that teacher wardrobe actually affects student learning. Jeans are not an educational detriment.

Fall is an amazing season: the colors, the leaves, the weather, football. It's my favorite time of year.

No better shopping than the post holiday clearance sales. Purchased two sweaters and a pair of flats for less than the original price of either sweater.

Why is it so hard to get out of Target without spending $100?